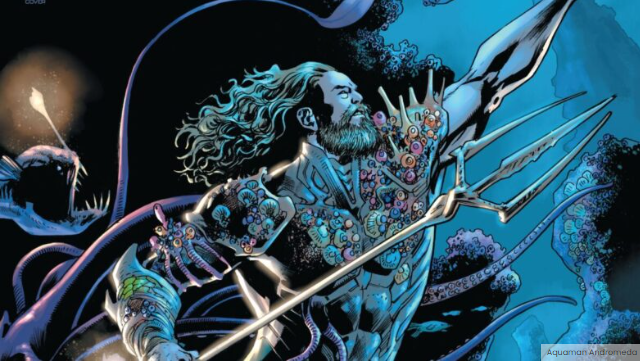 Two of the most popular titles currently on sale are Aquaman: Andromeda and Dark Crisis. They both come from DC Comics. The first is written by Joshua Williamson, illustrated by Daniel Sampere, and serves as the latest direct sequel to 1985’s crossover event, Crisis on Infinite Earths. This is the most recent continuity-free effort published under The DC Black Label imprint. It features a Ram V story and Christian Ward art.

These two mini-series share many similarities. Both stories are superhero tales that rely on dark as their central theme. However, the similarities end there as Dark Crisis represents the DC Universe’s limitations while Aquaman: Andromeda highlights the infinite possibilities.

This is not meant to be a dig at Sampere and Williamson. Dark Crisis on Infinite Earths (to use the “real” title) can be enjoyed on its terms. It is a fun crossover that follows the same path as its predecessors. It’s hard to ignore how tired it all is. Every plot point and character is grounded in DC canon, some elements of which are almost 40 years old.

Many fans believe continuity is the best part of a shared universe like DC’s. It adds more history and emotional weight to proceedings. This continuity-heavy approach to storytelling underlines how boring Dark Crisis is. It is a sign that the plot potential in the publisher’s admittedly rich IP is starting to run out.

Williamson is credited for incorporating the cyclical nature of the DC crossover machine, mainly the meaninglessness and futility of death in a world where it’s seldom truly the end, into Dark Crisis’s narrative. Even though it is challenging to address the inherent limitations of a story, it is not the same thing as breaking them free. After reading the first two issues, you will feel there is nothing the DC Universe can say about its characters and itself through a “Crisis.” crossover.

How could there be? Aside from Crisis on Infinite Earths, this fictional reality has seen Infinite Crisis and the optimistically called Final Crisis. Not to mention countless other cataclysmic events. It doesn’t matter how unique a story is; it has almost always been done before.

This isn’t to say that DC Universe doesn’t have the potential for great stories. Aquaman: Andromeda, a comic book series, is an excellent example of how writers and artists can put a new spin on DC’s most iconic villains and heroes, provided they don’t have to adhere to the established DC canon.