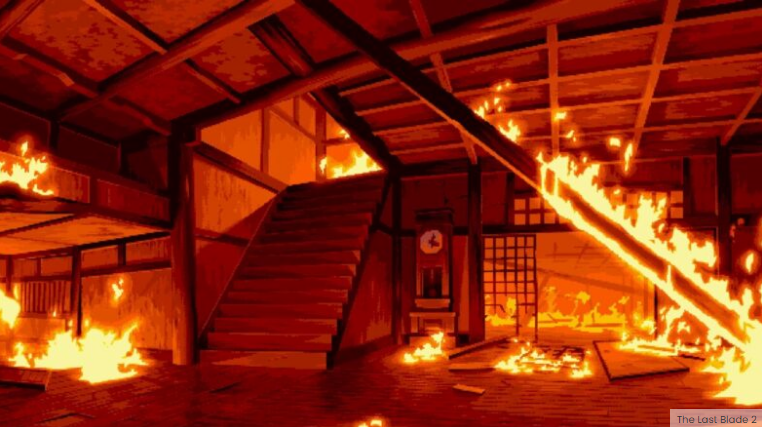 We are back with a more frequent celebration of some of the fighting game’s greatest stages. Today we are returning to Feudal Tokyo to discuss a fight in a raging hellfire, and it’s The Last Blade 2’s Large fire At the Wadamoya stage.

There were many fighting games in the 90s and 2000s. Some survived stronger than ever, like Street Fighter, Mortal Kombat, and Tekken. However, others went under. Although games like Bloody Roar, Rivals Schools, Fighting Vipers, and Rivals Schools have been forgotten, it doesn’t mean that they aren’t worth remembering.

This was true even for SNK. King of Fighters and Samurai Shodown games are well-remembered and continue to be played. However, Art of Fighting and Fatal Fury, as well as Buriki One, were either abandoned or absorbed into larger SNK titles. The KoF series combines five fighting games into one, while Samurai Shodown surpassed The Last Blade, SNK’s Feudal Japan fighting title.

The Last Blade series was similar in style to Samurai Shodown. It was a 2D weapon-based fighting game with high damage output, many defense capabilities, and a fast pace.

Two fighting modes were available, speed and power, which allowed players to choose between quick combos or raw damage. The Last Blade’s simple controls, combined with a lot of depth and ease to use, made it an excellent game.

The Last Blade 2 was a sequel to the original game. It added new characters and abilities and a third fighting style, Ultimate. This hidden fighting style combined the best of both fighting styles with defensive moves. It also featured the legendary Large Fire At Wadamoya, a classic fighting game stage background. The Large Fire stage is flawless from concept to execution.

Large Fire At Wadamoya may be the most simple name for a stage in fighting games history. However, its simplicity is what makes it so appealing to play on. The location iy similar to Tekken 5’s Moonlit Wilderness, but it’s on two sides.

Moonlit Wilderness, which is so beautiful and isolated, is a joy to see. Two people fighting there add weight like nothing else in this universe to these characters.