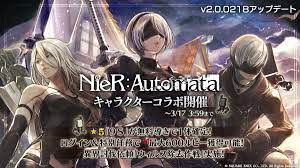 When the crossover event for NieR Reincarnation was announced, we knew the Final Fantasy XIV collaboration with the NieR franchise wasn’t over. We didn’t know how much it would cost. Naoki Yoshida, director of FFXIV and producer, joined a Livestream for NieR reincarnation to share information about the event’s content and showcase the collaboration. It will begin on Tuesday, May 10, 2022. It’s going to be quite a lot bigger than we expected.

We will be getting short stories and stages related to FFXIV ( Shadowbringers in particular), but Natsuko Ishikawa, the lead scenario writer, contributes her storytelling skills to the collab. The NieR and FFXIV collab has a new trailer. It also includes gameplay footage. The scenarios are based on the last stretch of the Amaurot Dungeon from Shadowbringers. As weapons/characters, Reincarnation features White Mage, Dragoon, and Dark Knight (named Phantasmal exile, Phantasmal Weapon, and Phantasmal Prisoner, respectively).

However, the trailer’s biggest draw for us FFXIV sickos was the teaser that ended the trailer. It featured a snippet of Emet-Selch taken from the scene of him looking out over Lakeland in the Shadowbringers Q.

Based on the translations of Audrey Lamsam, NieR producer Yosuke Saito stated on stream that Ishikawa had been given the story for the crossover content. Although we aren’t sure if Emetselch will be the main focus of the crossover story, it seems that the lore surrounding him will. It was not revealed much more, but it appears that Ishikawa was capable of including a lot of FFXIV spirit into these weapon stories.

NieR incarnation weapons are characters and collectables. These weapons are storytelling devices, extensions of the lore entries that you can see in the mainline NieR game. Each weapon in reincarnation is a different branch of playable content that tells its own story within the world NieR. Maybe, just like we have 9S and 2B in the FFXIV world, we might see Emet-Selch with his big dumpy and snappy snaps and limpy wave exist in NieR.

NieR reincarnation has existed since February 2021. It is available on both Android and iOS devices. You can play it as a mobile RPG in the gacha style, but you should be aware of your expectations if you plan to get into it for the FFXIV content. The FFXIV event trailer can be viewed below.